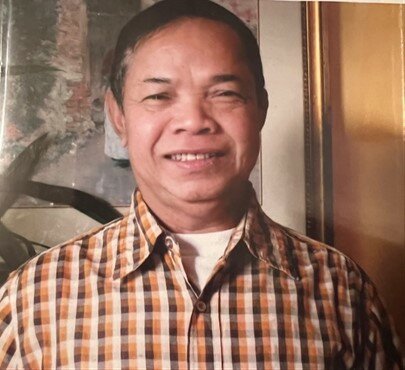 Lowell Bun, a native of Battambang, Cambodia, passed away peacefully surrounded by his loving family on January 4, 2023 at age 80 in the Trumbull, Connecticut home that he shared with his wife, Lit Bun and son, Nikara Bun.  Lowell was cared for by his wife, children, grandchildren, extended family and close friends.

Lowell was born to the late Oeurn Bun, who predeceased him in 1997, and to the late Er Plong.As the youngest child, he was known by his siblings as “Bou”.  Due to his father’s untimely death when he was just a baby, he was raised by his mother and older siblings.  At the age of 17, he entered the Buddhist Monastery and was devoted to practicing the Buddhist philosophy and delivering its messages to the community.  He left the monastery in his late twenties when he met and married his wife and only love.  Together they started a family in the countryside, where he built a traditional house on stilts for his wife and young children.Leah Sim, was their first born child and shortly thereafter, he welcomed Loum, Kolab, and Sovanni.  Lowell was self-learned and became an experienced farmer, fisherman and carpenter.  Through these expertise, he was able to help enrich his family.

In early 1975, news spread swiftly throughout the villages that the Khmer Rouge were killing innocent Cambodians.  With his quick thinking, Lowell packed up his wife and children onto their wagon with few belongings and traveled throughout the night to Thailand for refuge.  The journey was long and grueling as he sometimes traveled on foot.  Once Lowell and his family arrived at the Thai border, they were sent to the refugee camps along with other Cambodians that had also escaped. Lowell and his wife welcome their fifth child, Thoeun, in the Thai Camp.

In late 1979, Lowell was provided the opportunity for him and his family to come to America.  Lowell and his family landed at JFK airport and thereafter traveled to their destination in Bridgeport, CT.  Lodging and food was provided to the family by the International Institute and Blackrock Memorial Church. After a couple of years in Connecticut, Lowell welcomed their youngest child, Nikara. Lowell worked at a manufacturing company and after several years, he enrolled at and received a carpentry training certificate from Bullard Haven Technical School.  Lowell was always employed at two different full time jobs at a given time to support his family.  He was employed at Pitney Bowes and Vitramon for many years and his last employment was at Trumbull Board of Education. Many years of savings allowed Lowell and his wife to purchase their first home where they raised their six children and soon his second home in Trumbull.

Lowell lived a fulfilling life. He learned to speak English fluently, obtained his US citizenship, was well read and was well traveled.  During his life, he traveled overseas on multiple occasions to Cambodia, France, Canada and to St. Maarten.  He also enjoyed traveling within the US with his family, bringing them to visit relatives in California and various southern states.  He loved going fishing, watching boxing and wrestling.  He loved listening to old Cambodian folk music and his favorite singer was Sin Sisamuth.  He loved discussing politics and was a big advocate for ensuring the Cambodian customs and Buddhist teachings were instilled in his children. His former experience as a Buddhist monk and proficiency to recite Buddhist passages allowed him to preside over traditional Cambodian wedding ceremonies.  He became known to the Cambodian community as a “Ja”.  He truly enjoyed this part of his life and was very proud of this duty.

The Family wishes to express their gratitude for the love, kindness and compassion Lowell received during his life.  The Family would also like to thank everyone for their support and gracing us with your presence today.

Lowell’s family will receive relatives and friends at The Abriola Parkview Funeral Home, 419 White Plains Rd., Trumbull on Saturday January 7 from 5:00pm till 7:00pm. Funeral services will be held at the Funeral Home Sunday morning at 8:30, followed by the burial in Nichols Village Cemetery.

Share Your Memory of
Lowell
Upload Your Memory View All Memories
Be the first to upload a memory!
Share A Memory