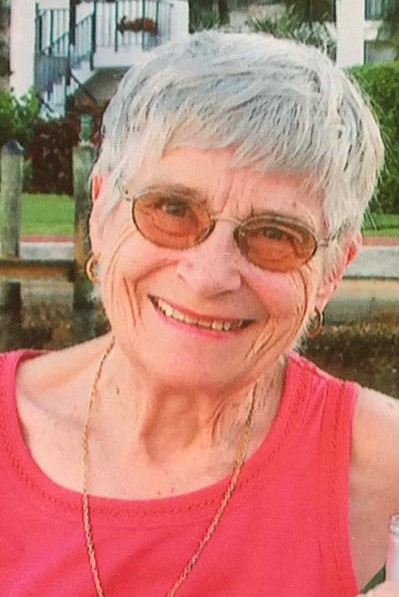 In lieu of flowers, contributions may be made in her memory to Alzheimer's Association. Click here to donate http://www.alz.org

Joan Marie Herold Lobdell, age 92, of Shelton and Fairfield, passed away peacefully on Saturday, November 26, 2022, just three weeks after the passing of her beloved husband of 72 years, William Irving Lobdell. Born in Bridgeport on May 26, 1930 to Frederick and Dora Herold, she lived in Black Rock in her earliest years before moving to newly built Fairfield home in 1937. There she spent her childhood and teenage years with her mother and sister Fran, after the passing of her father when she was 14. Later, Joan and her husband Bill purchased her cherished childhood home to raise their own five children and provide "daycare" to many grandchildren, before moving to Shelton in 1997.

Growing up, Joan attended Stratfield School and Roger Ludlowe High School, where she excelled academically and was very active in drama and student government. After high school, Joan started as a receptionist and learned bookkeeping, which she would continue to do throughout her career.

She met Bill Lobdell at a Thanksgiving party in 1949 and they were married at Our Lady of the Assumption Church in Fairfield on September 4, 1950. They moved to Pearl River, NY after their marriage, but returned to Fairfield to be closer to their families. She was the proud mother to five children born between 1952 and 1969. During those years, she was an active volunteer at the children's schools and was dedicated to raising their family. She later returned to work at H&R Block and Sikorsky Aircraft. After her official retirement, she wasn't ready to slow down and enjoyed working full-time at her son Jeff's store, Huntington Paint and Wallpaper, where she was fondly known as the "wallpaper lady". During her life, Joan was devoted to her husband, their five children, twelve grandchildren, five great-grandchildren and many grand dogs. She was "Gramma Joanie" to her grandkids.

Joan and Bill were avid sailors and lifetime members of the Fayerweather Yacht Club in Black Rock. They enjoyed sailing in Long Island Sound and out to Block Island with the whole family. Race nights were her time to shine as she prepared wonderful meals on board The Flying Cloud to whomever was 'crew' for the night. It was never unusual to see the massive sails and spinnaker laid out on the dining room table as Joan sewed the rips back together. In their early retirement years, they sold The Flying Cloud and purchased The Caledonia in Puerto Rico, where they sailed throughout the US Virgin Islands and the Caribbean.

Joan loved hosting large family parties for holidays and birthdays, although any excuse for a gathering was a joy. Her Sunday night suppers were something that sailing friends, neighbors and family looked forward to. As a grandma, she made certain every grandchild felt celebrated and was there for countless school assemblies, sporting events, dance recitals and graduations nearby in Connecticut and a plane ride away in Florida. Perhaps the fondest memory of Joan's love of family was her creation of the Christmas stocking family tree, which graced her fireplace every December. It started with seven stockings for Joan, Bill and their children, and expanded over the decades to include a new stocking for every addition to the extended family. Joan was also an avid reader and loved to knit, crochet and sew.

Joan had a huge spirit and was the most energetic, thoughtful, positive, generous, practical, creative woman that so many were privileged to know and love. She could create a grand meal out of any imperfect leftovers, an analogy for how she could take the seemingly ordinary and make it into something greater. She was her family's matriarch and superwoman, who made life so very special for every person who was blessed to know her.

Friends are invited to greet the family for a memorial gathering at Abriola Parkview Funeral Home, 419 White Plains Road, Trumbull, CT, on Saturday, January 21, 2023 from 12:00 to 3:00 pm.

In lieu of flowers, contributions may be made in her memory to Alzheimer's Association. Click here to donate http://www.alz.org

Share Your Memory of
Joan
Upload Your Memory View All Memories
Be the first to upload a memory!
Share A Memory