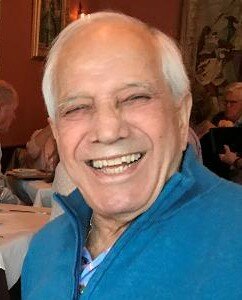 Gabriel A. Marino, (Bob) age 89, of Fairfield passed away peacefully on Thursday, May 26, 2022 at his home surrounded by his loving family. He was the beloved husband of the late Nancy (Fiore) Marino. Born in South Norwalk on February 5, 1933, to the late Luigi and Clara (Mattera) Marino. Mr. Marino graduated from Norwalk High School in 1952 where he played a storied football career as a fullback. He would brag to his grandchildren that he could out-run the best of Connecticut’s track and field runners and State record holders at the time.

After graduating high school, Gabriel enlisted in the U.S. Army, serving his country honorably during the Korean Conflict in post-war Germany. He was a master carpenter and contractor who built one-of-a-kind homes and friendships with his clients via his company, Gabriel A. Marino Construction. He was a lifelong member of both the South Norwalk Boat Club and the Laurel Athletic Club.  During his lifetime he built many friendships.  Gabe was always the first to offer help to anyone or to share whatever he had.  His Catholic faith played a pivotal role in his life. He was an active parishioner of both Assumption Church in Westport and St. Pius X Church in Fairfield.

Gabriel was an avid gardener and was renowned for his tomatoes that everyone had a chance to enjoy (including his several times evicted groundhogs and chipmunks). He enjoyed boating and clamming with his friends and family, long after the cold weather forced others out of the water. He loved to watch his UConn Women’s Basketball games and would provide box scores and commentary as a service to all of his friends and family.

Above all, Gabriel loved and adored his family. His greatest joy in life was the time he spent surrounded by them, especially his grandchildren and great grandchildren. Late into his years, he could still pummel his great grandchildren with indoor snowballs and play games of “keepy uppy” with oversized balloons. A loving and devoted husband, father, grandfather, great grandfather, brother, uncle, cousin, and friend of many. He will be deeply missed by all who knew and loved him.

He is survived by his loving daughters, Karen Marino of Shelton, Susan Marino Nemeroff of Fairfield, and Patti Marino Kamper and her husband Gregg of Glen Allen, VA, his cherished grandchildren, Adam (Megan) Nemeroff, Alyssa Nemeroff, Christopher (Bailey) Kamper, Kayla Kamper, Philip Kamper, his adored great grandchildren, Nathan and Gabriella Nemeroff, as well as many close family and friends. In addition to his beloved wife Nancy, he was also predeceased by a brother and a sister.

A Mass of Christian Burial will be celebrated on Friday, June 10, 2022 at 1:00 p.m. in St. Pius X Church, 834 Brookside Dr., Fairfield. Interment will be held privately for the immediate family.

Share Your Memory of
Gabriel
Upload Your Memory View All Memories
Be the first to upload a memory!
Share A Memory