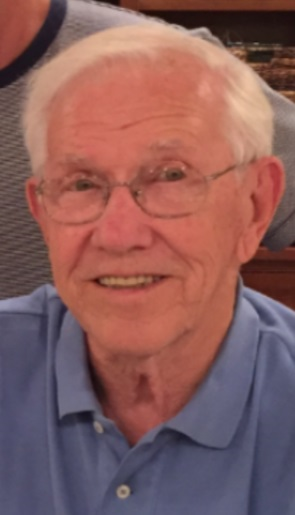 Edwin Paul Schmedlin of Shelton and formerly of Bridgeport passed away peacefully on March 12, 2022.

Edwin was born in Fairfield, CT on July 18, 1931 and graduated from Central High School in the class of 1949. He enlisted in the Air Force after graduation and was stationed at Edwards Air Force Base in the Mohave Desert where he was selected for specialized training and received clearance to work on the new B-52 bomber airplanes during the Korean War. He rose to the rank of staff sergeant and earned special recognition for his outstanding support and contributions to the US bomber program. After his military service, he met his future wife Marie Mencarelli and was happily married for the next 63 years.

Edwin was a printer by trade and retired from Babcock Intl (formerly American Chain & Cable Company) after 25+ years of service. Edwin enjoyed all sports with baseball being his favorite. He grew up a Brooklyn Dodgers fan and would tell stories of attending games at Ebbetts Field in the polo grounds with family and friends. He played baseball in high school and then transitioned to softball, playing for his Air Force base team and then company team. He bowled many years at the Duckpin Lanes in Stratford, golfed regularly at the Wheel and in his later years enjoyed watching his son play softball and grandsons play rugby, soccer and baseball – depending on the grandson and season.

He was predeceased by brothers Alfred and Kenneth Faulkner and Alvan, William and Robert Schmedlin; and a sister Ruth Maiocco.

All are invited to attend a Mass of Christian Burial on Wednesday, March 16, 2022 at 10:00 am directly in St. Lawrence Church, 505 Shelton Ave, Shelton, CT. Interment with Full Military Honors will follow in St. Michael Cemetery, Stratford. There will be no calling hours. Arrangements in care of the Abriola Parkview Funeral Home, 419 White Plains Rd., Trumbull.

Share Your Memory of
Edwin
Upload Your Memory View All Memories
Be the first to upload a memory!
Share A Memory