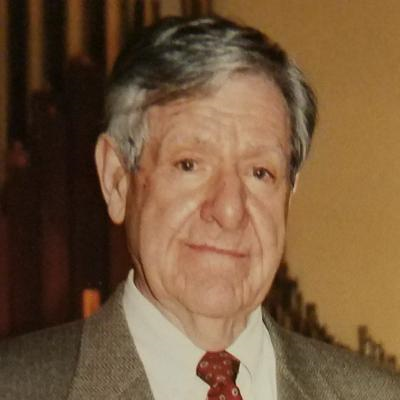 Paul O. Rawson, accomplished industrial designer and artist, of Easton CT, late of Haverford PA, passed peacefully on January 11, 2022.  Paul turned 100 this past November as sharp and witty as ever. Born in Worcester MA to Paul and Grace Rawson, Paul grew up in Thompson CT. He attended the Rhode Island School of Design and assisted in the design of destroyers and aircraft in World War II.  In 1943 Paul married his high school sweetheart Lois Covell of North Grosvenordale CT.  At one years old, Paul lost a kidney and Lois worried that he might be “a bad bet”. Instead they were happily married for 73 years until Lois passed in 2016, spending most of those years in the house they had built in Easton in 1965, which incorporated much of his custom woodwork.  Paul was known to shower Lois with beautiful hand-painted cards and poetry.

Paul’s career as an Industrial Designer led to numerous design patents through his work first at the General Electric Corporation, then as Vice President of the Van Dyke Consulting firm and later at his own company, Rawson Design.  Among the notable patents are the design of the first GE Toaster Oven, currently on display in the Smithsonian Institute; the first electric curling iron for Clairol Co.; the first computer-controlled milling machine for Bridgeport Machines; the first mid-size computer for Digital Equipment Corporation and many surgical instruments including the first surgical stapler.  Columbia, Waring, Farberware, JC Penney, Timex, Hoffman LaRoche, Corning, Winchester and Black & Decker are among the many clients whose products carried his aesthetic touch.

However, he may best be remembered for his work as an artist. Paul delighted in spending time in his basement studio listening to classical and big band music while creating imaginative watercolor paintings.  He had a wide range of subjects, and he could be bold or sublime.  Many of his works tugged the emotions while others captured a mood. In later years he turned to sketching, often on post card sized mats which he would sign and send to friends in the mail.  As Covid restricted visits, he created hundreds of these postcards to stay connected with his church family, friends and relatives.

Paul is survived by his two children Daniel Rawson and his wife JoAnn, and Nancy Rawson and her partner Jim Conmy, along with grandchildren Erica Lind and Richard Lind and his wife Liz and their two children, Richie and Emilia, nieces Susan Keach Sweeney, Lois Cohen, Joan Arsenault, nephew Stanley Jordan Keach and their families, his caretaker Robert Wright and family, and his church family at the Jesse Lee Church in Easton. In consideration of Covid, a Committal Service will be held at the Resurrection Cemetery in Newtown, CT Jan. 22nd at 12:00, and a Celebration of his life will be planned at a later date.  In lieu of flowers, please send contributions to Jesse Lee United Methodist Church, 25 Flat Rock Rd. Easton, Connecticut 06612; (203)372-8250.

Share Your Memory of
Paul
Upload Your Memory View All Memories
Be the first to upload a memory!