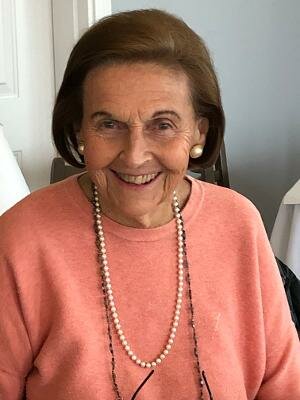 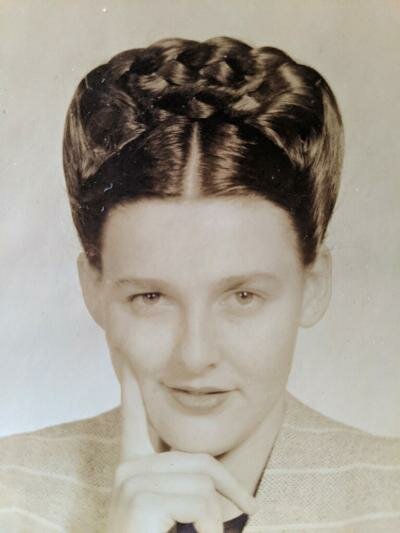 Peggy was born October 26, 1928, in Bridgeport, CT and graduated from Warren Harding High School in 1946. It was in the Harding alumni choir where Peggy first met Pat. The two songbirds became love birds and married in 1952 after Pat was discharged from the Army.

In 1947 young, pretty Peggy won a photo contest sponsored by the Bridgeport Sunday Herald. The paper sent her to Washington DC as one of Mrs. (Congressman) John Davis Lodge's Champagne Bubble Beauties. In DC, Peggy attended the American Aid to France Benefit Ball. Her dinner companion was World Bank President John C. McCloy. Peggy was not only presented to Henri Bonnet French Ambassador to America, but also dined with five-star General Omar Bradley. This was a highlight of her young life.

Raising her own five children was not enough for Peggy. She spent her life as an advocate for all children. In 1985, running on the platform "PTA: Peg Takes Action," Peggy was elected the 34th President of the Connecticut Parent Teacher Association, serving two terms. Peg chaired and served on many boards and civic organizations on the state and local level including RYASAP, Trumbull Cares, and the CT Juvenile Justice Committee. She was also a life-long Rotarian. In 2001 Peggy was honored by the Governor's office for her contributions to protect the state's children from substance abuse and violence. In her 80's she served as president of the Bridgeport Hospital Auxiliary and was active in that organization until she suffered a stroke in early 2020. In 2012, at the age of 84, Peggy received her Associates Degree from Housatonic Community College, something she was very proud of.

Family and friends will miss Peggy's beauty inside and out. Her apple-cheeked bright smile, and warm, infectious personality ensured you never forgot meeting Peggy. And when you did meet her, she would ask you a hundred questions. She loved to play tricks and lead party games. She was the fun mom in the neighborhood, and life of every party to which she was invited. You never knew what Peggy was going to say or do next. She loved Halloween, creating many haunted entries in her home for her grandchildren, as well as dressing up in an effort to scare them, even at ripe old age of 89.

Peg and Pat had many dear and close friends from Bridgeport Hospital, with whom they enjoyed many over-seas travels. They were also former members of the Patterson Club, making lasting friendships there, as well. They also had a "New Year's Eve" group, that were all high school friends who spent most New Year's Eves together.

Peggy leaves behind her four daughters and one son: Pamela and her husband Paul McLaughlin of Stratford; Patrice Perillie-Missett of Puerto Escondido, Mexico; Penny and her husband Mark Schroeder of Trumbull; Polly and her husband David D'Addario of Easton, as well as Paul and his wife Debra Perillie of Huntington, Long Island. She is survived by her seven grandchildren to whom she was known as Gram: Ryan McLaughlin and his partner Marta Buczynska; Jodi McLaughlin and her husband Claude Petruccelli; Sarah Schroeder and her husband Drew Rodgers; Kimberly Schroeder; Siena D'Addario and her partner Cooper Gordon, Olivia D'Addario, and Samantha Perillie. As well as four great-grandchildren who called her GG: Leo Pasquale and Henry Petruccelli, Mara Mavis Schroeder-Rodgers, and Nathen Buczynska. She also leaves behind her nephew Pat Haverkoch and wife Joyce of Mount Laurel, NJ, Vanessa Haverkoch of Bennington. Vt, her Aunt Millie Tedesco and cousin Shirley Alexay

Peggy's family would like to express their heartfelt gratitude to her many caregivers. Their efforts were critical in providing Peggy with a quality of life in her final years that otherwise would not have been possible.

In lieu of flowers, donations may be made to Liv It Up at livitupcommunity.org, or the Regional Youth Adult Social Action Partnership at www.RYASAP.org — 2470 Fairfield Avenue, Bridgeport, CT 0660-5267.

Share Your Memory of
Peggy
Upload Your Memory View All Memories
Be the first to upload a memory!
Share A Memory