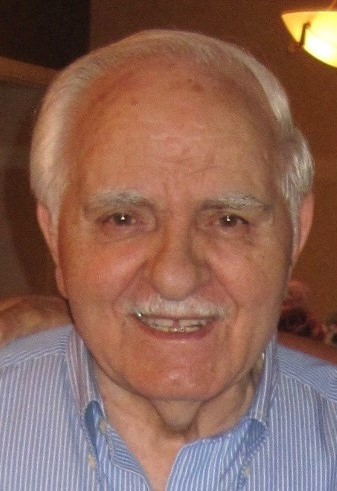 In lieu of flowers, gifts in Bill's memory may be made to St. Barbara Greek Orthodox Church, 480 Racebrook Rd., Orange, CT 06477.

He was born on January 1, 1933 in Vounihura, Fokidos, a small village in central Greece. He came to the United States as a young man chasing the American dream. He was a Hamden resident since 1979. In 1974 he became the founder and owner of Acropolis Diner in Hamden. He loved his job and worked there until his early eighties. He was the face of the diner and was greatly loved by all his patrons and staff. He will always be remembered by his customers for his humorous jokes and lovely smile. He was very proud of his Greek heritage and loved to cook and dance. He was a great husband, father, and grandfather. He devoted his life entirely to his family, putting his wife and children above everything first.

He is survived by his wife Evangelia Gioulos and his loving children; Stavros Gioulos and his wife Christina of Hamden, Panagiota Gioulos and Cleanthes Podaras of Branford; cherished grandchildren Konstantinos Sousoulas and his fiancée Victoria Tavares of Branford, and Vasilios (Billy) Gioulos of Hamden; as well as many nieces and nephews in the United States and Greece.

Due to concerns at this time surrounding social gatherings, the funeral will be privately held at The Gate of Heaven Cemetery in Trumbull. We thank all of the doctors, nurses and staff at Connecticut Hospice for their great support and hard work. We give special thanks to Father Peter Orphanakos of St. Barbara Greek Orthodox Church in Orange for all his love and support at this difficult time.

In lieu of flowers, gifts in Bill's memory may be made to St. Barbara Greek Orthodox Church, 480 Racebrook Rd., Orange, CT 06477.

Share Your Memory of
Vasilios
Upload Your Memory View All Memories
Be the first to upload a memory!