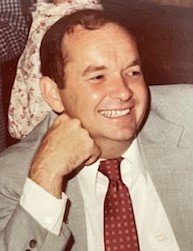 On July 8, 2021, Fred Reichert of Shelton popped a home run and rounded the bases for the last time. Fred slid into home, safe at the plate, and passed away peacefully. He is survived by his loving wife, Barbara (Blaze) of 60 years; son Rick (Frederick G. Reichert, V) and his wife Danielle of Stratford; daughter Gretchen and her husband Pete Krajcsik of Shelton; grandchildren Samantha, Connor, Cole, Riley; several nieces and nephews and his beloved terrier, Casey.

Those who knew him as Dad, Freddie, Uncle Freddie, and Grampy miss him dearly; he will be remembered as a true friend, loving husband, doting Dad and the world’s best Grampy. The world will never be the same without seeing his smile or hearing his stories.

Devoted to his Christian faith, Fred was a longtime member of Church of the Apostles. It was during the 1970s when Fred started a tax preparation business that he led many people to faith in Christ.

His kids remember Fred fondly bringing the family to New York at least twice a year for shows, museums, tours, or to see his beloved Yankees play. Rick and Gretchen tagged along with Dad to numerous basketball games at UB, SHU, and Fairfield U.

Fred was larger than life and about the smartest person you would meet - he knew history and baseball facts like no one else, read everything and knew all the good Netflix shows to watch.  He was currently reading Uncle Tom’s Cabin (for the 3rd time) and his daily New York Post was where he got most of his information to share with everyone who would listen. He was also the family joker, telling stories, putting on silly masks, or playing little pranks on the kids.

Fred was always one of the kids. As a teacher, he was home most summers in Fairfield. You would find him with the kids fishing for sunnies off the dock on Lake Hills, or bringing Ricky and Gretchen and a dozen Springer Road kids (plus a few nephews) to the woods behind their home, where they'd cook hot dogs in the "Hippie Cave." Most of all, he instilled in them a deep, lasting love and respect for nature.

One of Grampy’s greatest joys in life was spending time with his grandchildren. Whether it was exploring Gillette’s Castle, fishing “Grampy’s Island” at Nell’s Rock Reservoir, hitting golf balls and playing bocce at Oxford Greens, going to Yankee’s games, or any of the many adventures or activities he would dream up.   Always interested and involved in his grandkid’s lives, he was truly the best Grampy any kid could ever have.

Fred was born February 7, 1937 in Bridgeport's North End to Fred "Freddie" G. Reichert, III, a respected Bridgeport athlete and businessman; and Jane Dorsey Reichert; he was pre-deceased by three sisters. Fred was a graduate of Fairfield Prep ('55), and University of Bridgeport ('62).

Fred met Barbara in 1960. Shortly before their wedding in 1961, Fred was drafted into the Army, and the newlyweds spent their first anniversary at Ft. Bragg; he proudly served his country during the Berlin (Wall) Crisis.

Home from the Army, Fred spent the next four years teaching at Redding School in Redding, CT. Later, Fred was a popular teacher at North Street School in Greenwich, where he taught fifth grade for three decades. He was known to bend the rules a bit - he and his students built a garden or flew kites at school - he explained to the strict principal that they were learning about horticulture or the weather.

But after 30 years battling Merritt Parkway traffic, he retired from teaching and turned his attention to his next career. Fred always had a love of numbers, and put that love to work, preparing tax returns on the side of his teaching career. Once retired, he launched his practice, Fred Reichert and Associates. He built a successful practice with hundreds of clients, many of whom became friends.

Friends and relatives may greet the family at 11:00 am on Friday July 30th until the time of the memorial service at 12:00 pm at the Abriola Parkview Funeral Home, 419 White Plains Rd., Trumbull.

In lieu of flowers, please consider a donation in Fred’s name to a veterans organization of your choice.

Share Your Memory of
Frederick
Upload Your Memory View All Memories
Be the first to upload a memory!