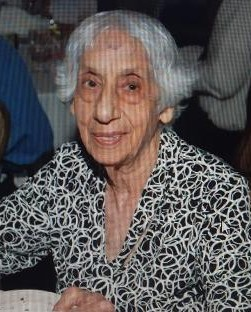 Mary Ann Roumanos, formerly of Monroe, passed away peacefully on Sunday night, March 7th at 106 years of age. Mary was born in Shelton on October 26, 1914 as the fifth of 12 children to parents Peter and Amelia, both of whom emigrated from Lebanon. Graduating from Shelton High School in 1932, Mary trained and received her license as a registered nurse (RN) at Griffin Hospital in Derby. Shortly thereafter, she was sent to be with family in northern Lebanon, where she met and married her husband, Joseph. After spending 23 years raising a family of five children, she moved back to Connecticut in 1961. Mary continued to reside in Fairfield County, working in various nursing specialties and eventually retiring as a nurse for the Bridgeport school system in 1981. She continued to live in Monroe until the end of 2016, traveling regularly to see family in Nevada and Florida.

Born on the precipice of World War I and before women had a legal right to vote in the United States, Mary bore witness to some of the most significant events in modern human history. At home, she was an avid cook, where her recipes carried on generations of traditional Lebanese cuisine. Raised as a Maronite Catholic, she remained active in her church and regularly attended Mass at St. Stephens on Main Street. Her compassionate and maternal personality remained a hallmark among her family and friends, where she was widely known as "Sitou".

She is predeceased by her husband Joseph, her eldest son Robert, her grandchildren Katherine and Christopher, and her great-grandchild Angelina. Those she is survived by include her sister Adeline, children Jay, Josephine, Sonia, and William, along with 15 grandchildren, 27 great-grandchildren, and an extended family spanning 6 continents.

A walk-through visitation will take place on Saturday March 20, 2021 from 8:30-9:30 a.m. at Abriola Funeral Home, 419 White Plains Rd, Trumbull. Visitors are asked to wear masks and social distance as they walk through, pay their respects, and exit without lingering to ensure all guests can come through the building. A Mass of Christian Burial will be celebrated at St. Lawrence Church, Shelton at 10:00 a.m. Interment will be private.

Share Your Memory of
Mary Ann
Upload Your Memory View All Memories
Be the first to upload a memory!