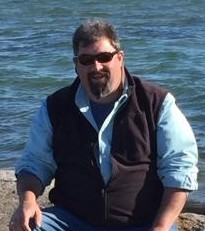 Richard Frederick Moore III, age 51, of Shelton and formerly of Trumbull, died on Monday, September 7, 2020, at Bridgeport Hospital, with his mother and sister at his side. Born in Bridgeport, he was the son of Nancy Rybar Moore of Shelton, and the late Glenn R. Moore. He grew up in Trumbull. As a teenager, he was a member of Trumbull’s Junior Republicans and remained a staunch Republican his entire life. As an adult, he was an active member of the Trumbull Park Board. Richard attended Vermont Academy and Prescott College. He had worked as a sales associate in the auto industry for over twenty years and presently was the vice president of marketing for the Moorefield Herb Farm in Trumbull.

Richard loved the outdoors and spent a great deal of time working in the garden as well as collecting treasures at tag sales and flea markets. He loved growing heirloom tomatoes and delighted in sharing the fascinating stories of their origins. He was particularly proud of his collection of the hottest peppers in town. His participation in local farmers’ markets fostered his deep appreciation for the camaraderie of other growers.

Richard was a great voyager. His sense of adventure led him to Alaska and the Yukon Territory, where he spent months camping in the wild. At a very young age, Richard developed a passion for sailing that would continue throughout his life. When he wasn’t on the water, you might have found him indulging his love for live music. During his college years, this was revealed in lengthy trips across the country in a well-loved Volkswagen bus, as he faithfully followed his favorite band, the Grateful Dead. In recent years, this love of live music brought him to the Vibes at Seaside Park each summer, where he spent days camping and enjoying the company of others who shared his musical interests.

Those who knew Richard well would describe him as up for anything. Fun-loving and possessing an offbeat sense of humor, he enjoyed regaling his family and close friends with outrageous stories. His personality could be summed up in one of his favorite sayings: “Don’t threaten me with a good time!”

In addition to his mother, Nancy, survivors include his sister, Laura Moore, her husband Thomas LaChuisa, his treasured niece and nephews, Anna, Marco and Quinn, all of Nantucket, his uncle Louis Rybar of Shelton, his aunt Janice Moore of Trumbull, and many cousins. In addition to his father, Glenn, he was predeceased by his paternal grandparents, Richard and Mary Moore, his maternal grandparents, Louis and Anna Rybar, his aunts and uncles Wayne Moore, John and Evelyn Drake, and Dwight and Frances Hansen.

His family would like to express heartfelt thanks to the extraordinary team at the Bridgeport Hospital Cardiac ICU.

A celebration of his life will be held at a later time.