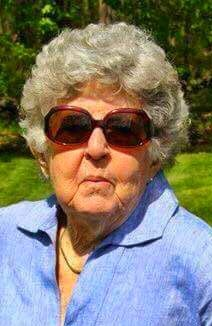 Mary Grace Mandanici, age 97, of Bridgeport, passed away peacefully at St. Vincent's Medical Center in the early morning hours of Friday, May 4, 2018 surrounded by her loving family. She was the cherished wife of the late Mayor John C. Mandanici, and a passionate admirer of snowstorms and colder temperatures. She was infatuated by the endless winter of 2018 and departed as the thermometer hit into the 90's. Known for her humor and quick wit, she bore a striking resemblance in multiple ways to the character Maxine. Sharing tales of questionable behavior from her youth well into adulthood, she believed that age was not a number but a state of mind.

Born Mary Grace Mullins on December 22, 1920 in Nichols, she was the youngest daughter of Francis H. and Cecelia Louise McGrath Mullins. She graduated from Harding High School with a flair for numbers and pushing boundaries. After marrying, she moved to Bridgeport where she resided until her death. A business owner, avid gardener and a New York Yankee Fan, she embraced life but cherished time with her family most.

In addition to her husband and parents, Grace was predeceased by her brother Vincent Mullins and her sisters Cecelia Mullins and Bernadette Cunningham.

The family would like to extend their appreciation to all of the doctors and nurses, especially those at St. Vincent's, who treated Grace and her family with immense kindness and compassion over the years.

Funeral services will be held on Tuesday, May 8, 2018 at 11:00 a.m. directly in St. Catherine of Siena Church, 200 Shelton Road, Trumbull, for a Mass of Christian Burial. Interment will follow in Gate of Heaven Cemetery, Trumbull. There will be no calling hours. In lieu of flowers memorial contributions may be made to St. Vincent's Nursing College, 2800 Main St., Bridgeport, CT 06606.

Share Your Memory of
Mary Grace
Upload Your Memory View All Memories
Be the first to upload a memory!
Share A Memory