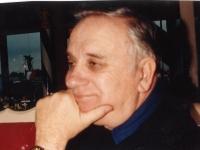 Ed Warren, age 79, world renowned paranormal researcher and ghosthunter, of Monroe, died on Wednesday, August 23, 2006 at his home with his beloved wife of 61 years, Lorraine Moran Warren by his side. Born on September 7, 1926 in Bridgeport, Connecticut, Mr. Warren was half of the husband and wife team of Ed and Lorraine Warren, Seekers of the Supernatural. The team was often asked to assist in numerous police investigations involving satanic ritualistic murders, and were in high demand by hundreds of colleges and universities to speak on the subject of the supernatural. Mr. Warren was a U. S. Navy veteran of World War II having served in both the Pacific and European Theatres. After his military service, Mr. Warren attended Art School and sold many of his paintings, mostly depictions of haunted houses and New England winter scenes. Mr. Warren and his wife, Lorraine, have co-authored ten books on the subject of the supernatural. Two of the books were made into made for television movies, The Demon Murder Case and The Haunted. They were among only a handful of investigators asked to investigate the Amityville Horror Case, and were consultants on the first Amityville Horror film. Mr. Warren was one of only seven religious demonologists in the nation. Ed was also an avid animal lover and advocate, having rescued numerous animals over the years. When once asked if he feared death, Mr. Warren remarked, No, I dont fear it, not one iota, I know Ill be going to a beautiful place, a place so spectacular it defies words. As Jackie Gleason once said, when asked the same question, Why should I fear it?, Im going to die anyway.

Funeral services will take place on Saturday, August 26, 2006 at 9:00 a.m. from the Abriola Parkview Funeral Home, 419 White Plains Road, Trumbull, and at 10:00 a.m. in St. Stephen Church, Trumbull for a Mass of Christian Burial. Interment with full military honors will follow in Stepney Village Cemetery, Monroe. Friends may call on Friday from 4-8 p.m.

Share Your Memory of
Ed
Upload Your Memory View All Memories
Be the first to upload a memory!
Share A Memory