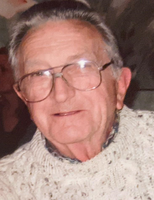 William Irving Lobdell, age 97, beloved husband of Joan Herold Lobdell of Shelton and Fairfield passed away peacefully on Tuesday, November 1, 2022, surrounded by three generations of his beloved family. Born August 7, 1925 in Bridgeport, he was the third eldest of six children of the late Charles Herbert Lobdell and Margaret Cullinan Lobdell. He spent his childhood through retirement as a resident of Fairfield for nearly seventy years before moving to Shelton in 1997.

A man of science, he graduated from Roger Ludlowe High School in 1943 and attended Cornell University and the University of Bridgeport to earn his Bachelor's in Mechanical Engineering. He was a proud veteran of World War II and served in the Army-Air Corp with an honorable discharge after the war in 1946. He spent his career in the aerospace industry working as a Mechanical Engineer at such companies as Curtis Wright and AVCO Lycoming, and traveled abroad to Germany and Africa many times for his work. He was proud to have worked on the Lycoming T53-L-1 Turboshaft Engine, which is featured in the Smithsonian's National Air and Space Museum's Boeing Aviation Hangar in Chantilly, VA. In his retirement, he worked at his son Jeff's paint store, Huntington Paint and Wallpaper, for ten years, volunteered at the National Helicopter Museum in Stratford and served on volunteer boards at Aspetuck Village and the Shelton Housing Board. He had a brilliant mind that left an impression on anyone he met and an impeccable memory for recalling birthdays and anniversaries.

During his life, Bill was dedicated to his wife, their five children, twelve grandchildren, five great-grandchildren and many grand dogs. He was "Pop" to his grandkids. He enjoyed sailing with his family and caring for his boats, especially the Flying Cloud and the Caledonia, and was a lifetime member of the Fayerweather Yacht Club in Black Rock. He loved large family gatherings, listening to classical tenors and Irish folk music, enjoyed reading non-fiction and historical movies such as "The Mission," building in his workshop, trading stocks, and watching his beloved Red Sox. Near or far, he was devoted to keeping up with his kids and grandkids around the country with regular phone calls.

Friends are invited to greet the family for a memorial gathering at Abriola Parkview Funeral Home, 419 White Plains Rd. Trumbull, CT, on Sunday November 6, 2022 from 12:00 to 3:00 pm.

In lieu of flowers, contributions may be made in his memory to https://www.doctorswithoutborders.org/