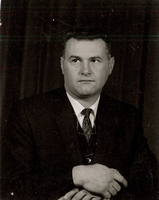 John J. Formichella, age 91, of Monroe, passed away on Saturday, June 4, 2022 at Bridgeport Hospital and was the beloved husband of the late Elizabeth Thompson Formichella. Born in Bridgeport on January 1, 1931, he was a son of Italian immigrants, the late Frank and Elvira Formichella. John was predeceased by his brother Gaetano Formichella (Louise).

John was a graduate of Central High School and Quinnipiac College where he received his associate degree, focusing on accounting courses. He joined the United States Army and served his country during the Korean War in the Philippines. While serving in the Philippines, he honed his skills as a topographic surveyor and helped develop the much needed telecommunication lines on the islands. After returning from the Philippines, he used the knowledge he gained and worked on numerous interstate infrastructure projects. He then became a police officer with the Bridgeport Police Department where he had 30 years of dedicated service and retired with the rank of captain in 1985.

The family would like to profoundly thank the hard working and dedicated caregivers that made his life easier and more comfortable: Dawn, Katrina, and Heather. Thank you for everything that you have done.

A Mass of Christian burial will take place on Friday, June 10, 2022 at 11:00 a.m. in St. Jude Church, 707 Monroe Turnpike, Monroe. Interment with full Military Honors will follow in Gate of Heaven Cemetery, Trumbull. Friends may call on Friday morning from 9:00 to 10:30 a.m. at the Abriola Parkview Funeral Home, 419 White Plains Road, Trumbull.

In lieu of flowers, memorial contributions may be made to St. Jude's Children Research Hospital, 501 St. Jude Pl., Memphis, TN 38105.