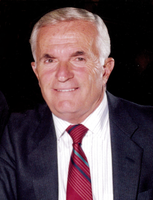 Peter A. Pappas Sr., age 88, of Trumbull passed away peacefully on Friday, January 8, 2021 at his home surrounded by his loving family. He was the beloved husband of Rose Ann (Christiano) Pappas. Born in Athens, Greece on April 19, 1932, he was a son of the late Alexander and Melpomeni (Zois) Pappas. He arrived at Ellis Island at age 8 and graduated from the prestigious Stuyvesant High School in New York City. He later obtained his Bachelor’s Degree from New York University. Peter was a proud U.S. Army veteran, having served honorably during the Korean War in the medical corps. He was later employed by the New York Times, where he served as Vice President of Circulation before his retirement with 45 years of dedicated service. Not only was he an active member of both the Trumbull VFW and the American Legion, but he organized and managed Wednesday night bingo through the VFW Association and the rentals of the VFW Hall. He actively contributed to the Trumbull Senior Center and was instrumental in the organization of the Thanksgiving food drive. He also organized the casino trips for local seniors. He was an avid sports lover in general, especially enjoying tennis and golf. He served as the Vice President of the Trumbull Golf Association and was proud to have organized the 9 hole, Monday golf program for adolescents ages 8 to 15, where members of the youth golfed for free during their Summer vacation. He was a loving and devoted husband, father, grandfather, great-grandfather, brother, and friend of many. He will be deeply missed by all who knew and loved him, family and friend alike.

Due to social distancing limitations, all funeral services and internment with full military honors will be held privately for the immediate family. In lieu of flowers, memorial contributions may be made to the Wounded Warrior Project, PO Box 758516, Topeka, KS 66675. Arrangements have been entrusted to the Abriola Parkview Funeral Home, Trumbull.