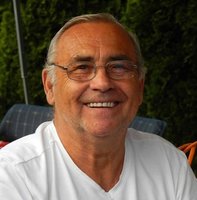 Henry Edward Targowski, age 76 of Trumbull, formerly of Fairfield, passed away peacefully on Thursday, July 23, 2020 at St. Vincent’s Medical Center, Bridgeport. He was the beloved husband of Alice (Fazekas) Targowski. Born on July 21, 1944 in Bridgeport, he was a son of the late Edward and Wanda (Chmielewski) Targowski. After graduating from Andrew Warde High School, Henry worked as a meat cutter in his early years at Food Fair, Pantry Pride & Shop Rite. He later went on to work as a plant operator for the Shell Oil Company, and became a Special Police Officer for the Town of Fairfield. Henry was a loving, caring man to whom family was everything – family by birth and marriage, and the family he acquired along the way throughout his life. His most favorite times were those he spent surrounded by his siblings, children and grandchildren. Hank was an expert at making memories…Papa’s pool, spoiling his grandkids, trips to Disney, Texas, Vermont and many hunting trips. He loved to dance, his taste in music ranged from James Brown, to Willie Nelson to Andrea Bocelli. He was a true outdoorsman – loved hunting and fishing, skiing, skeet shooting and clamming at Cockenoe Island. He passed his love of all these things on to his children and grandchildren.

When you remember him, remember his smile, the sparkle in his eye, feel one of his hugs, sit down and have a cup of coffee, and treasure the memory of a life well lived. He will be truly missed by all who knew him.

In lieu of flowers, in honor of Henry’s love of children, donations may be made to the St. Jude’s Children’s Hospital, 501 St. Jude Place, Memphis, TN 38105.

Due to the concerns about social gatherings affecting us all at this time, all funeral services and interment will be held privately for the immediate family. Arrangements have been entrusted to the Abriola Parkview Funeral Home, Trumbull and online condolences may be left by visiting us at www.abriola.com.