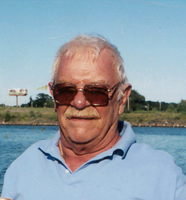 Robert (Bob) Flower was born in Lynn Massachusetts April 26, 1930 to Floyd and Marion Flower. He graduated from Saugus High School in 1948 where he played football and served as President of the Senior Class. Following high school Bob served in the Naval Reserve before entering the US Air Force in 1948. While in the Air Force Bob saw combat in the Korean War when he was attached to the 1st Combat Cargo Command. He was Honorably discharged from the Air Force in 1952 with multiple medals, including the Bronze Star and ribbons earned during the Korean conflict.

Following his service in the Air Force, Bob returned to Saugus, where he served as a regular and reserve police officer from 1952-1960. In 1953 Bob began the General Electric Engineering Training Program. He worked at Precise Metals in Saugus in 1959 before moving to Monroe Connecticut in 1960. His work in Connecticut began as a Senior Process Engineer for Avco Corporation from 1960 through 1968, followed by a Senior Production Engineer position with Burndy Corporation 1968 through 1973. In 1973, Bob joined Sikorsky Aircraft as a Senior Manufacturing Engineer. He retired from Sikorsky in 1988.

While living in Monroe, Bob was actively involved with the Monroe Lion's Club, serving as President in 1968. In addition, with the support of the Lion's Club, he started Monroe's first Pop Warner football team in 1963. Bob was a Lifetime member of the Veterans of Foreign Wars (VFW). He was Commander to the Stratford VFW 1983-1987 and was Commander of Connecticut District #1 in 1987 with oversight of 24 VFW posts.

Bob had a lifelong love of boating, with over 50 years of boating experience on the Long Island Sound. In 1982 he won the Bishop Cup predicted log race. He was a lifetime member of the East End Yacht Club, serving on the Board of Governors for 9 years and as Chairman for 5 years. In addition, he was a boating crew member with the Coast Guard Auxiliary.

Bob was a life member of the Disabled American Veterans in Milford, a member of American Legion Post 200. He was also a member of the William Sutton Lodge of Masons in Saugus, MA, the Holten Royal Arch Chapter of Masons of Holten, MA and the Newbury Port Commandery Knights Templar in Newburyport, MA.

Service will be held privately at a later date.