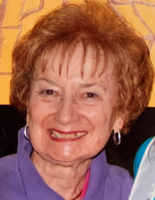 Lucille Bedrosian Sahagian, 93 passed away peacefully of natural causes in her home on May 16, 2020. She was the beloved wife of John Sahagian. Born in Chicago, Illinois to Kesrow and Rebecca (Babian) Bedrosian, she had a wonderful childhood in Chicago surrounded by lots of love and family. She started her lengthy business career as the Executive Secretary to the William Morris Theatrical Agency. She later met her loving husband John Sahagian and moved to Fairfield, Ct. They had one daughter, Becky (Gangemi). Lucy had quite a career as a Businesswoman and was cited in the Who's Who of American Woman. Together with her husband they owned and operated many gas stations on the Conn Turnpike, New Jersey Turnpike and New York State Thruway. She was the driving force behind them all and standing at 5', everyone certainly knew who the Boss was! In her second career, after her husband passed away, she became a Travel Agent for the Etna Travel Agency. Travel was a great passion of hers and she travelled all around the world. Lucy was a very spiritual woman who loved her Armenian heritage. She was a past Treasurer of the Armenian Ladies Prelacy Guild of the Armenian Apostolic Church in NYC, as well as a past president and Treasurer of the Armenian Relief Society. She was on many other committees, always giving back to her church. She was also a lifelong member of Black Rock Church and The Armenian Church of the Holy Ascension. Her second love was Golf and her Country Club Shorehaven in Norwalk, where she was also a past treasurer and Board member. Lucy was predeceased by her parents and her husband, John Sahagian and her son-in-law, Sebastian (Sebe) Gangemi. She is survived by her daughter, Becky Gangemi of Trumbull and her 2 loving grandchildren Julian (Casandra) Gangemi and Jess (Ken) Banks and by her 2 new Great Grandchildren, Lucca Gangemi and Bryson Banks. She will be missed by her Brother Edward Bedrosian (Diane) of Boston, Mass and all of his family and the entire extended family. Due to concerns at this time surrounding social gatherings, all funeral services and interment will be held privately for the immediate family. A memorial service and Celebration Lucille's life will be held at a later date. In lieu of flowers, memorial contributions may be made to St Jude Children's Research Hospital, 501 St Jude Place, Memphis, TN 38105. Arrangements have been entrusted to the Abriola Funeral Home, Trumbull.