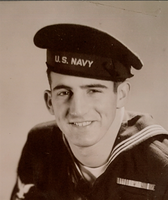 Ernest M. "Ernie" Roberto, age 95, of Stratford passed away peacefully on Saturday, November 30, 2019 surrounded by his loving family. He was the beloved husband of Mary Francoletti Roberto. Born in Bridgeport on November 7, 1924, he was a son of the late Michael and Carmela Pezzullo Roberto. He was a graduate of Bridgeport Schools and served honorably in the U.S. Navy during World War II. He was the former owner of Ernie's Grocery for 32 years and a proud member of the VFW Post 145. Mr. Roberto was a faithful usher at Holy Rosary Church before becoming a parishioner at St. Margaret Shrine. Ernie was also an avid New York Yankees fan and enjoyed watching UCONN Women's Basketball. He will be greatly missed by all who knew and loved him. In addition to his beloved wife Mary of 69 years, other survivors include his loving son, David Roberto and his wife Rita of Milford, his cherished grandchildren, Christopher Roberto and his wife Sarah and Matthew Roberto, his adored great grandchildren, Gabriel and Stella Roberto, as well as several nieces and nephews. He was predeceased by his brothers, John and Vincent Roberto. Funeral services will be held on Thursday, December 5, 2019 at 10:00 a.m. in St. Margaret Shrine, 2523 Park Ave., Bridgeport for a Mass of Christian Burial. Interment will be held privately. Friends may greet the family on Wednesday from 4:00 to 7:00 p.m. at the Abriola Parkview Funeral Home, 419 White Plains Rd., Trumbull. In lieu of flowers, memorial contributions may be made to St. Jude Children's Research Hospital, 501 St. Jude Place, Memphis, TN 38105 or to Make-A-Wish Connecticut, 126 Monroe Turnpike, Trumbull, CT 06611.