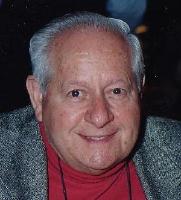 Anthony James Aiello, Jr., age 77, of Monroe, beloved husband of Phyllis Ann Petrino Aiello was called to our Lords eternal life on Friday, August 26, 2005 after a brief illness. He died peacefully surrounded by his loving family. Anthony was born on September 2, 1927 in Bridgeport, CT, the beloved son of the late Anthony and Rose Comparato Aiello of Bridgeport. Anthony attended Harding High School where he met Phyllis Petrino, his high school sweetheart and loving wife of 56 years. After graduating in 1946, he then enlisted in the U. S. Army and proudly served his country as an officer during World War II. After his military service, he graduated from Butler Business School in Bridgeport. Anthony was employed by Sikorsky Aircraft for 35 years until his retirement. Anthony and Phyllis made their home and raised their beautiful family in Fairfield before retiring to Monroe. Anthony was a parishioner of St. Stephens Church in Trumbull. He was a devout Christian and served as a Eucharistic Minister. Anthony loved the Lord and served him faithfully his entire life. His unwavering faith was an immense comfort and source of strength for him and his family during his illness. He was also a member of the Fairfield Chapter of the Knights of Columbus. Anthony was an avid golfer and devoted Yankee and UCONN basketball fan. Most of all, Anthonys happiest times were those spent with family and friends. He especially loved large family gatherings and holiday celebrations filled with laughter and good food. Anthony was a kind, gentle, spiritual man whose joyful heart and happy nature will be missed by all who knew and loved him.

Funeral services will take place on Monday, August 29, 2005 at 9:00 a.m. from the Abriola Parkview Funeral Home, 419 White Plains Road, Trumbull, and at 10:00 a.m. in St. Stephen Church, Trumbull for a Mass of Christian Burial. Interment will follow in St. John Cemetery, Monroe. Friends may call on Sunday from 3-7 p.m.